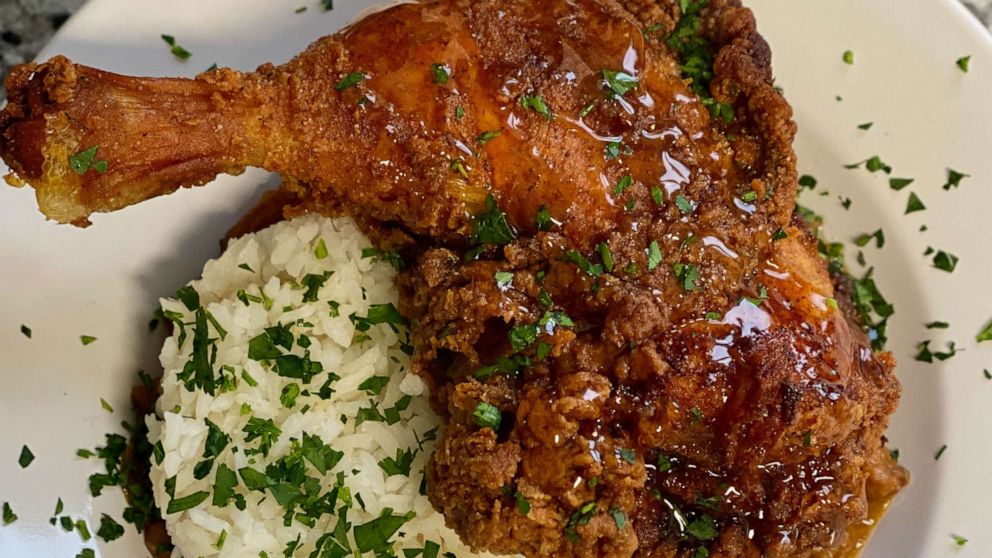 As June 16 is celebrated across the country, a chef whips up a hearty serving of one of his family’s traditions to mark the occasion.

African-American executive chef and Filé Gumbo Bar owner Eric McCree pays homage to his grandfather’s legacy at his New York Cajun-Creole restaurant and shared a dish the couple have eaten every June 16 since that he was able to help cook himself.

Juneteenth is celebrated annually on June 19 and commemorates the end of slavery in the United States. It was officially recognized as a federal holiday in 2021.

Amid the pandemic, the sound engineer-turned-chef decided to swap the performing arts of Broadway shows and concert tours for the culinary arts. He started working as a private chef before opening Filé, which is named after the iconic ingredient used to thicken and flavor okra.

From there, McCree’s vision to “take dinner on an exploration of Louisiana cuisine” came to life as he brought to life the nuanced flavors and ingredients of different regions of the state, creating cuisine influenced by different cultures with an emphasis on serving customizable okra.

“I grew up eating most of these foods with my grandfather,” he said of his larger-than-life inspiration, Aubrey “Tiny” Gaines. “It was something I already knew and loved – that’s the memory I wanted to bring throughout the concept – this food is all about that, it’s about being in the kitchen and to see and hear the stories” about how different families make the rich and historic dishes of Louisiana.

This weekend, McCree said “we’re pushing the idea that Juneteenth is a celebration of what the founding of America is, of the liberation of everyone and the possibility of allowing everyone from different cultures to experience what that America has to offer.”

The restaurant’s menu also features fried chicken with red beans and rice, which he remembers “from last June 19th celebrations with my grandfather.”

“We would make fried chicken, then wrap it up in paper bags and take it to the park and eat it,” McCree said. “I wanted to make a recipe to share how to make the homemade chicken that my grandfather taught me.”

Growing up in Boise, Idaho, McCree said he developed a love for cooking early on with his grandfather, who prepared and grilled massive amounts of ribs and barbecue chicken for their picnic. picnic at the church on June 19.

His grandfather’s larger-than-life personality is integral to the concept of his restaurant. “I tried to make large Southern-style portions – and it was a game of my grandfather, Tiny. It looks big, but the menu titles make it look small or tricky.”

McCree shared his full recipe below for their family’s Juneteenth Fried Chicken, which he says is the most delicious at a picnic served at room temperature.

Combine all the ingredients for the buttermilk bath in a large bowl.

Add the chicken pieces to the bath, completely submerged for 24 hours.

Preheat the oil in a Dutch oven to 300 degrees. Remove the chicken from the bath and toss it in a brown paper bag filled with floor dredge and shake. Shake off the excess flour and add the chicken to the oil.

Fry until the chicken floats to the surface of the oil and reaches an internal temperature of 165 degrees with a meat thermometer.

Take the chicken out and immediately season with the Cajun seasoning.