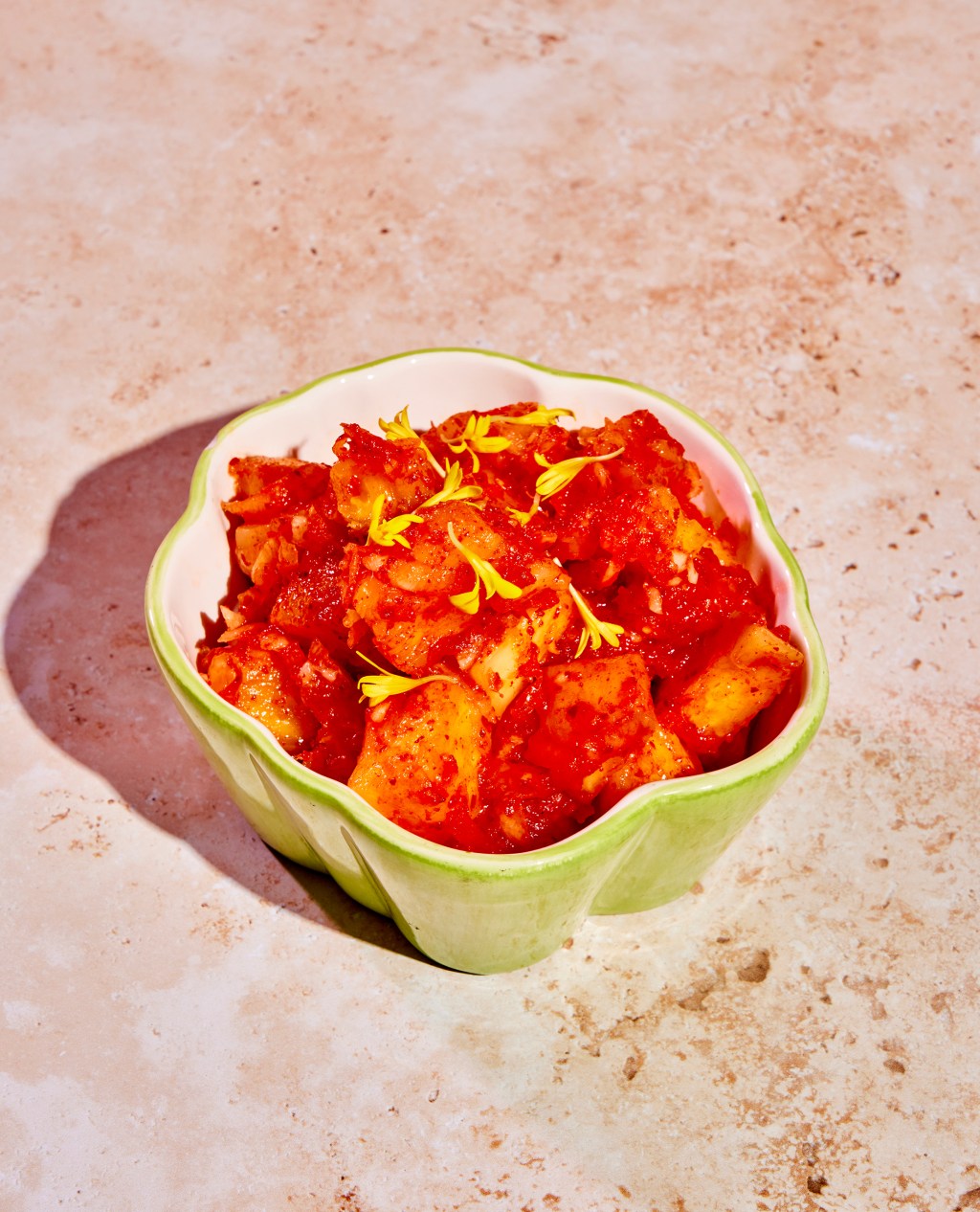 As Mission Chinese Food moved out of New York – the former downtown Manhattan hotspot that closed in 2020, followed by its location in Bushwick this summer – chef Danny Bowien is still bringing his culinary approach to a broader market: the home cook.

The chef has released a second cookbook, with a new mission: “wildly delicious cuisine for everyone”. Bowien notes that half of his restaurants’ menu was “quietly vegan” — plant-based without making much of it. All recipes in “Mission Vegan” are vegan and riff on Korean-American dishes. Sections include various renderings of kimchi, noodles and dumplings, rice, and stews. Bowien describes the book’s recipes as “simpler” than those in his previous cookbook, and in many cases – he offers the mapo tofu, for example – tastier.

“Anyone can cook from this book, skilled or not, vegan or not,” the chef writes in his introduction. “Because what’s the point of partying if your friends can’t all go?”

Below is Bowien’s recipe for pineapple kimchi, taken from the cookbook.

Like most kids, I loved pineapple growing up, taking it out of those little fruit bowls with the foil lids and the neon red cherry inside, but I had never eaten fresh fruit before. a Thanksgiving when my uncle Bud brought a couple. For some reason, even though my dad cut them and laid them out, no one had them. Except me. I ate both. I savored every bite – and was sick for days afterwards.

Despite that, I’m crazy about pineapples now. So when Mission Kitchen was having fun with kimchi a while back, I thought, why not? I am certainly not the first person to ferment the fruit. After all, there is the Mexican drink tepache. There is pineapple vinegar in the Philippines. And there’s the savant restaurant where I worked years ago where we fermented it to serve with oysters. Turns out kimchi is another great way to explore the savory side of pineapple, boosting its acidity and balancing its remaining sweetness with salt and heat.

Note: The weights here are important.

Put the pineapple in a large mixing bowl, sprinkle with salt and mix well. Let stand until pineapple begins to lose liquid, about 10 minutes. Add the onion, radish and gochugaru and mix well.Transfer to a clean 2-quart glass jar. Use a spoon to press down on the mixture, so the liquid rises to submerge or nearly submerge the pineapple. Cover with plastic wrap, pressing against the surface of the mixture, then add a small weight. Cover tightly with a lid and let ferment at room temperature until slightly sour, 2 to 4 days, rotating the container after 3 days.

Once fermented to your liking, store it in the fridge for up to 6 weeks.

From Mission Vegan: Wildly Delicious Food for All by Danny Bowien and JJ Goode. Copyright 2022 by Danny Bowien. Excerpted with permission from Ecco, an imprint of HarperCollins Publishers.