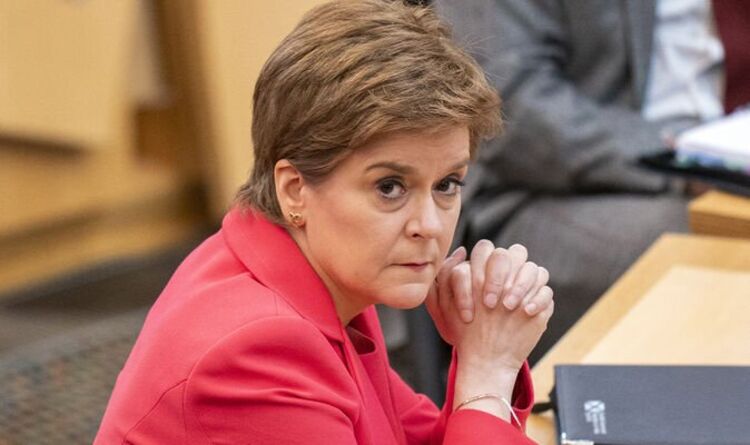 The Cabinet Minister has attacked the SNP-Green coalition at Holyrood for putting the UK at risk of overreliance on energy supplies from Russia. He blamed left-wing parties for creating a “recipe for disaster” by wanting to end the use of North Sea gas and opposing new nuclear power plants.

Ministers in Westminster fear that Europe’s reliance on Russian gas could leave the West vulnerable to Putin.

Prime Minister Boris Johnson has urged countries on the continent to quickly move away from using Russian gas.

There are fears that the Kremlin could cut gas supplies to other countries in retaliation for sanctions imposed in response to the invasion of Ukraine.

Attacking the Scottish Government, Mr Kwarteng said this morning that it was important to continue investing in North Sea gas as the UK transitions to greener energy sources.

He said: “The Scottish nationalist/green coalition is a threat to energy security.

“Shutting off North Sea gas and opposing new nuclear is a recipe for disaster.

“We need more investment in North Sea gas as we transition to cheaper renewables and more nuclear power.”

The UK government has presented its North Sea Transition Agreement, which aims to continue to safeguard oil worker jobs and energy security as the country shifts to renewable energy sources.

Around £16billion has been pledged to help switch to greener sources by the end of the decade.

Mr Kwarteng’s attack on the Scottish Government came after Leveling Up secretary Michael Gove yesterday admitted there were ‘different views’ between Holyrood and Westminster on energy policy.

“My own view is that there is a reason the Business, Energy and Industrial Strategy department exists as it is, as a UK-wide department.

“Energy security, for dark reasons that we are aware of, is really important, but there are legitimate differences of opinion on how to achieve it,” he told the parliamentary committee.

“I’m sure there will be Scottish government ministers who say some of that investment could be better prioritized elsewhere.”

A Scottish government spokesman said the problem was that Westminster was not providing enough financial support to help move away from reliance on North Sea oil.

They said: “The North Sea has a vital role to play in our transition to a net zero economy and we are undertaking a program of work on Scotland’s future energy needs, ensuring an approach that supports and protects our energy security. and our highly skilled workforce. , through the Energy Transition Fund, the Green Jobs Fund and the £500m Scottish Just Transition Fund for the North East and Moray.

“Despite the £300 billion that has flowed into the Treasury from North Sea oil since the 1970s, the UK government has so far ignored our repeated pleas to match our North East Transition Fund. “