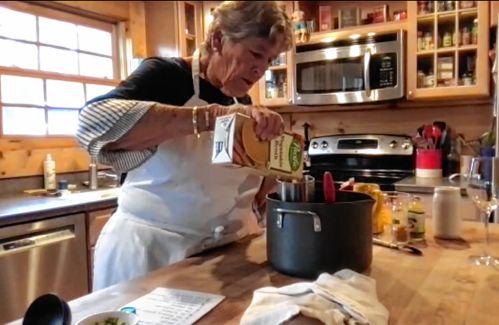 Kin Schilling has shared the perfect fall recipe – a butternut squash soup recipe developed for the first time in collaboration with the Cornucopia Project kids.

Schilling was the most recent teacher in the Hancock Town Library’s “Cooking with…” series, where local residents share their favorite recipes. The series is currently taking place virtually via Zoom, which allowed Schilling, who now lives in Colorado after nearly 40 years of living in the Monadnock area, to revisit his hometown and share a concocted recipe for the first time. at Hancock.

When asked to share a fall recipe, Schilling said she only had one to pull from her cookbook – one that was originally started by local elementary school students from the Cornucopia Project for their annual harvest dinner.

The ingredient list was a collaborative effort of the kids who first served it and has since been refined, Schilling said.

“I asked the kids, ‘What do you think we should wear?’ And one of them said, ‘Carrots,’ and it went from there,” Schilling said. “It all evolved and we made this soup.”

Schilling said she’d refined the recipe herself over the years — it originally didn’t contain wine, for example, she joked — and adjusted the spices, but it didn’t contain any wine. is a collaborative recipe.

“It’s a fabulous recipe and it’s definitely a kid’s recipe, with a little tweaking,” Schilling said. The recipe is good for that kind of individualization, Schilling said.

Schilling said that although she no longer lives in the area, her “heart is in Hancock” and the memories she made there. The best advice she could give, she said, was to put your emotion into your food.

“I cook with love. I don’t want it to sound hokey, but whatever I do I want to be delicious and filled with gratitude, and if you do that, there’s a total difference in how the food tastes,” Schilling said.

Instructions: Chop the vegetables and drizzle with olive oil. Roast all the vegetables until tender for about 40 minutes in a 375 degree oven. Mix in a soup pot. Add all the remaining ingredients and bring to a boil. Do not boil. Mash potatoes. Serve in a warm bowl, topped with sour cream and garnished with parsley if desired. Makes about half a gallon of soup.