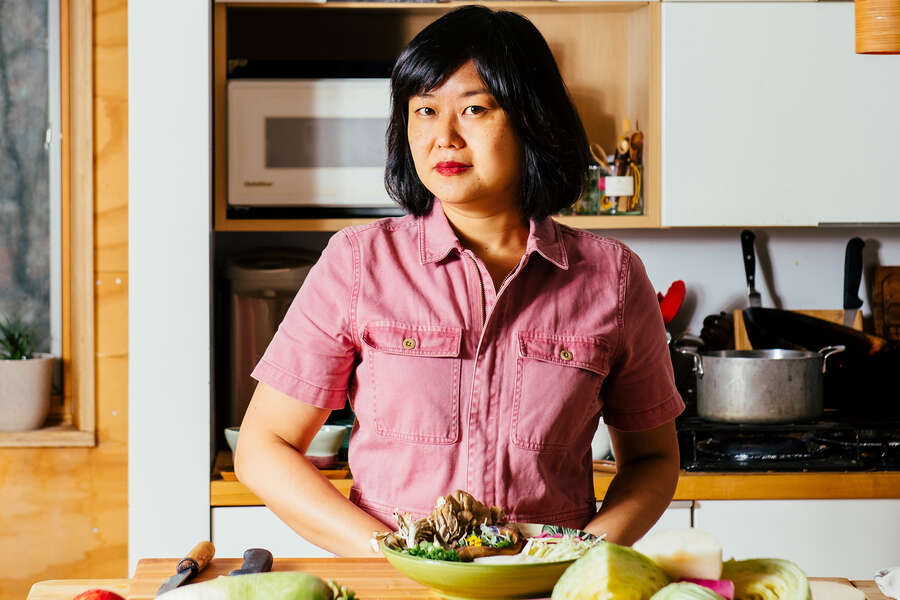 Make this Jeon recipe to celebrate the Mid-Autumn Harvest Festival

I’m still sad that I didn’t grow up celebrating Chuseok. For Koreans, Chuseok, our mid-autumn harvest festival that falls on September 10 this year, is one of the biggest national holidays, marked by family reunions (and the horrible traffic jams that clog Korean highways as the whole country seems to be hitting the road), ancestral tributes and massive amounts of feasting. But I knew none of that as a Korean-American kid in Virginia and Florida.

It wasn’t until I moved to Seoul after college that I was able to celebrate Chuseok in my own way. But as a child of Korean immigrants to the United States, my celebrations were a little different. I never had to sit in bumper-to-bumper traffic to one of my parents’ hometowns, and the women in my family didn’t have to work endlessly in the kitchen – a chore that the holidays unfortunately still entail for many.

Instead, I rode the mostly empty Seoul subway to visit an aunt for a cozy, mostly store-bought treat on a low table stacked with the dishes I now recognize as Chuseok classics: a colorful array of jeon, savory donuts that Koreans make from any dish. number of vegetables and proteins; songpyeon, a soft and sticky rice cake stuffed with sweet red beans, chestnuts, sesame seeds and other toppings; and the usual kimchi and steaming bowls of rice and soup.

Chef Ji Hye Kim, restaurant owner based in Ann Arbor, Michigan Miss Kimherself knows something about the improvised and atypical celebrations of Chuseok.

“Before, Chuseok was a village-wide celebration, with food shared among neighbors who all went out for a ganggangsullae,” she says, referring to a traditional Korean dance that women perform in a large circle under the full harvest moon. “There was always plenty of food, with days of preparation and hours of cooking” – and plenty of hands to help with the labor.

But Ann Arbor is a far cry from the idyllic Korean countryside, so Kim (who grew up in an urban apartment complex in bustling Seoul) makes her restaurant the Chuseok hub for her community when the holidays roll around.

“Before the pandemic, we had family-style feasts with huge platters of Chuseok food,” Kim says, explaining that her restaurant has since adapted by offering ready-to-eat meals for diners at home and by adding holiday specialties like torantang (a savory taro soup with hazelnuts) to the menu. For this year’s Chuseok, she even taught a recent online cooking class for New York’s 92nd Street Y featuring dishes like neobiani, a thick, luxurious cut of beef. “It’s what moms do, not the kind of thing you find in restaurants,” she fondly recalls.

Outside of work, Kim prefers to invite a friend over for a “mini-Chuseok celebration” to share the holiday over a freshly fried jeon that incorporates Michigan’s bounty of seasonal produce, from chestnut mushrooms to leafy from celery to summer squash varieties.

“I feel good about making jeon, a dish that is so much a party, just for the two of us,” she says. “I like to take care to make every bite of jeon delicious.” And for the record, Kim has no problem with families choosing to serve store-bought songpyeon rice cakes for dessert, especially when frying jeon a la minute.

Frying each jeon to order and eating it piping hot reminds Kim of her family’s Chuseok celebrations in South Korea when she was a child. In Kim’s family, as in many Korean households, women spent an entire day frying huge quantities of jeon for the multiple days of Chuseok, which they stored in a basket and then reheated at mealtimes. “But I always liked them from the start,” Kim says with a mischievous grin, “so I lingered around trying to get the hottest ones.”

She shares her recipe for hobak jeon, which she loves adapting for different types of summer squash in season in Ann Arbor near Chuseok. “The little squash is fun because when you cut it in half it looks like a little UFO, and at farmers markets in Michigan I look for smaller zucchini, which tends to have fewer seeds and less water “, explains Kim. .

When cooking for yourself or just for another dinner, like Kim does during the holidays, she recommends eating hobak jeon straight from the pan before the squash slices become soggy due to their natural water content. . But if you’re cooking for a larger group, Kim’s advice is to salt the squash slices beforehand to draw out the water, which she dabs lightly before dredging and frying the jeon. It’s about getting that perfect lightness from expertly fried egg batter and tender, delicately flavored squash.

Kim credits her mother, who considered herself the best cook in the family, with sharpening her palate, even though the matriarch fiercely guarded her own recipes.

“What she taught me was tradition, which tastes really good,” Kim notes. “What I learned from her was the clean taste of homemade food.”

Master Jeon Dry Paste
Yield: Many lots of jeon. This can be mixed in advance and kept in the pantry as a staple.