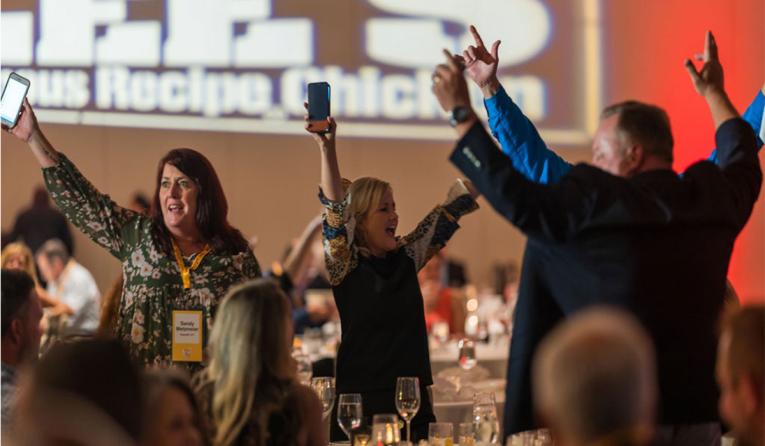 With record sales, healthy AUVs and a modern new store design on the horizon, Lee’s Famous Recipe Chicken’s annual brand conference focused on brand updates and growth for the future of franchise. Artemis Lane Partners and CEO Ryan Weaver became the new owners last year of the heritage brand, originally founded in 1962 by ‘Colonel’ nephew Lee Cummings and business partner Harold Omer, and delivered on their commitment to investing more in the brand, buying 12 existing stores in the first 12 months, putting what Weaver says is “skin in the game” in its commitment to building the future of the brand.

“Sales continue to be strong, we’ve created better alignment with franchisees, and the Lee’s brand outperforms many of our competitors,” Weaver said at the recent conference held at the JW Marriott Orlando Bonnet Creek Resort. “Over the past 12 months, we have signed the largest franchise development agreement in company history, opened two new franchise stores and are making improvements to our corporate infrastructure and store locations. newly acquired business. We see continued success with our best-in-class product, competitive menu prices, customer service and community involvement in our current 130 locations. With this information, we had reason to base ourselves on last year’s theme ‘the future is famous’ by letting operators, managers and supplier partners who attended this year’s conference know that ‘the future is even more famous’ at Lee’s.”

Weaver goes on to say that the investment in corporate units were stores in Ohio, Florida and Kentucky that were long-time successful operators who were ready to retire and exit the system. He says these stores will continue to set the brand standard going forward with planned investments in digital initiatives and reimagined stores going forward.

Additional Lee’s Brand Conference titles and honors awarded at the conference include:

In addition to the awards and accolades, attendees heard about restoration, design and communications professionals who are part of the brand’s future, which Weaver says is emboldened by better owner engagement, a team growing support, improved systems and tools, and customers who love the brand. .

The news and information presented in this release has not been corroborated by WTWH Media LLC.