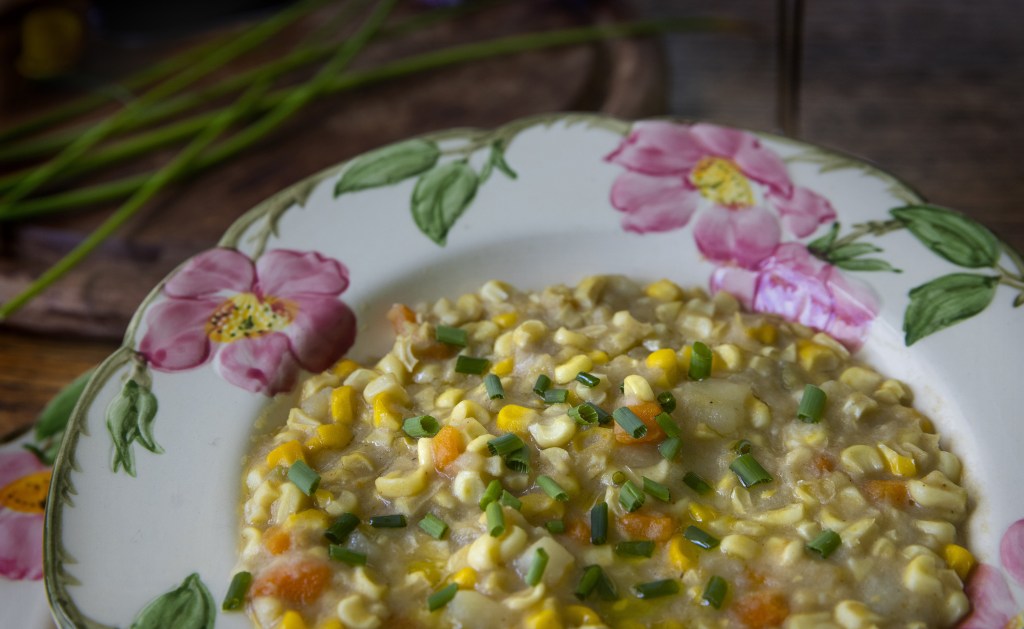 SEATTLE — Corn chowder doesn’t sound like a thrill. A ubiquitous vegetable plus a soup intended to use any type of ubiquitous substance using equally ubiquitous milk and/or cream plus other ubiquitous vegetables…should be fine. No wonder, however. And then, vegan corn chowder – not to denigrate anyone’s food choices, but taking dairy out of the picture…maybe not so good.

Stellar Seattle Communion chef Kristi Brown whips up an amazing vegan corn chowder. Apologies for the garish capitals, but this is corn chowder that makes you want to SHOUT IT. To quote myself from January 2021 (because I’ve raved about this corn chowder before): “This superlative soup might fool the biggest butter lover: luxurious but also earthy in texture, smooth and slightly smoky, spicy but deviously.” The star ingredient is joined by a full cast of sweet potato, carrot, celery and onion, served garnished with plenty of diagonally cut green onions for peppery freshness. In December 2020, I also correctly described this vegan corn chowder as “beautiful”.

I pestered Brown for more details at the time, and she was only saying that it’s definitely vegan, that really good olive oil comes into play, that saving lots of leftover veggies to make your own vegetable broth is clutch, and that seasoning is her mix “like 18 different spices” which she calls Sez’. She says she is going to start selling Sez’, and we should all fervently hope for this gift to mankind.

Brown’s vegan corn chowder is so good everyone wanted to eat it, so at Communion they had to make it sometimes 20 gallons at a time, and she got sick of it, and she says she could never again put it back on the menu, or else it might sometimes. The genius gives way to his whim.

Summer is the best season for corn chowder because fresh local sweet corn is ALSO AMAZING, and, if you’re not going to eat it straight off the cob, unsullied by anything, chowder corn is, in fact, the only other way to go. Also: Corn chowder is excellent served cold in the shade on a hot afternoon, possibly accompanied by a glass of rosé (or enjoyed in a pot while cooling in front of the open refrigerator at any time of the day or night ).

On behalf of all of us, I recently pestered Brown again via text about her vegan corn chowder, and while she won’t part with the recipe and certainly won’t reveal the composition of Sez’, she gave me some clues. She uses red onion (I decided to use both red and yellow for my chowder), but advises against putting leftover red onion in homemade vegetable broth (although, according to Brown, yellow onions are fine for this purpose). She approved of my plan to make a quick vegetable broth using corn on the cob and leftover vegetables for those of us who can’t manage to keep a bag of leftovers in the freezer. (Bad us!) She also revealed the appropriate dairy substitute: oat milk. (Also: I happened to mention that I don’t like green peppers because they make me burp green peppers, which she has-ha’d. And – guess what – the great Kristi Brown also doesn’t like green peppers, so any of you who do are officially wrong.)

I’m just going to say categorically that the vegan corn chowder I made isn’t as good as Brown’s. It is however very, very good and definitely worth doing. Maybe one day she will give us her recipe and/or that of Sez. I encourage you to experiment with the spices here – I kept mine quite light, although a bit of cayenne zip does show. Like Brown’s, this corn chowder scales beautifully with reheating, thickening, and enriching (certainly a word), if you don’t eat it all at once (or eat all the leftovers cold).

Choose your corn carefully. The leaves should be nice and green, not dry, and the silk that comes out should ideally be pale and even slightly sticky. Be bold in peeling the envelope – not just at the tip, but all the way down. You deserve good corn! Look for plump, firm kernels. And make sure you buy locally grown sweet corn, because it’s the best, because I’m sure Brown would agree if I had to nag her about it.

BJC’S Vegan Corn Chowder – With Thanks to Chef Kristi Brown

To note: OK, vegans, please don’t yell at me, but for those on dairy, oat milk/cream can be replaced with half and half (preferably organic), and those definitely- other-not-us-vegans can also stir in a little butter with the olive oil. And Kristi Brown said this, not me: Her original non-vegan corn chowder recipe had salmon in it, so… — Bethany Jean Clement

1 small to medium sweet potato (orange or white, your choice), peeled and cut into 1/4-inch dice (about 1 cup)

A dash of cayenne

Fuck it! Then, place each cob of corn on its end on a tray or in the bottom of a large, shallow bowl, and use a sharp knife to carefully cut the kernels off, reserving the cobs (and, of course, the kernels). Warning: if your corn is nice and fresh, it will be messy. (Optional: some recipes say to “milk the corn”, which involves running the back of a knife over the bare cobs to extract all the juice. I have a feeling we’re going to extract those precious corn fluids making the broth afterwards, and I’m also going to say that life seems too short to spend time milking corn.)

Break the corn cobs in half and put them in a 3 1/2 or 4 quart jar, along with 1 whole carrot broken in half, 2 celery ribs broken to fit the jar (plus any celery tops) , 1/2 yellow onion, 2 fresh or 1 dried bay leaves, 1 teaspoon of salt and a pinch of white pepper. Add water almost until covered, about 4 to 6 cups. (The pan will be crowded,) Bring to a boil, stir, then reduce heat to simmer for 30 minutes, stirring halfway through cooking. Remove from heat, and let rest.

Heat the olive oil for a minute or two in a large soup pot or Dutch oven over medium heat, then add the diced yellow and red onions, diced carrot and diced celery. Season them with salt and pepper, stir and cook for about 6-8 minutes, stirring again about every 2 minutes. Sprinkle with flour and cook, stirring, for another 1-2 minutes. Remove from fire.

Carefully strain the broth through a strainer into a large bowl.

Add the potato, sweet potato, 1 tsp salt, a pinch of white pepper and 2 fresh or 1 dried bay leaves to your vegetables in the large pot, then add enough strained stock to cover everything. Bring to a boil, then reduce heat to low, stir and continue cooking until potatoes are tender, about 15 minutes, stirring perhaps every 5 minutes.

Add the oat milk/cream, corn and spices, then stir and season lightly with salt and pepper. Add a little more broth or water if it seems very thick, although the corn releases a fair amount of liquid, so don’t panic. Increase heat to bring back bubbling, reduce heat to simmer and cook 15 minutes more, stirring occasionally.
Add more salt and white pepper to taste – you’ll probably want to add a teaspoon or more of salt, a little at a time, to balance out the sweetness of the corn, sweet potato and onions. Do not be shy !

Simmer another 15 minutes to half an hour, stirring occasionally. At this point, the chowder should be thickened and ready to serve; cooking more or reheating later will thicken things up more, clumping together the vegetables and breaking down the corn, which is also good.

Garnish with chives or green onion and a drizzle of high-quality olive oil, and enjoy. Also good served cold during the summer heat.

Serves 6 as a soup dish, maybe 4 for a light lunch or supper.