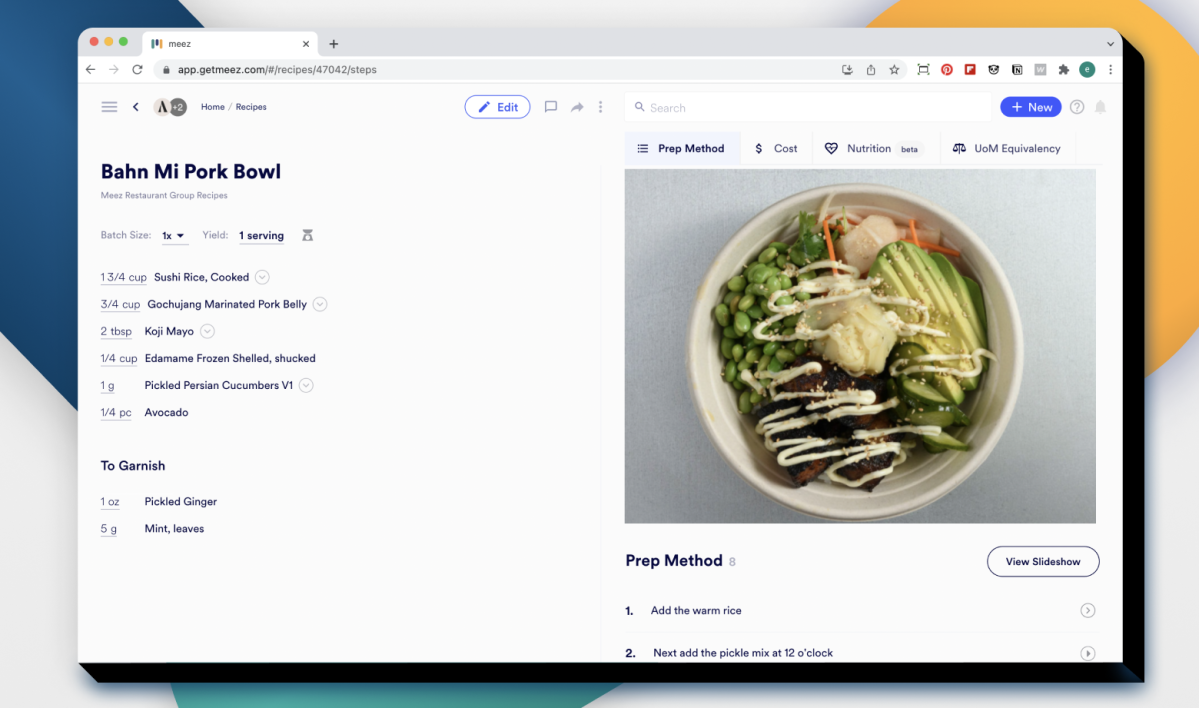 Restaurant kitchens across the country are trying to manage customers while managing labor shortages. This means it’s important to get new employees up and running faster.

Josh Sharkey, chef, founder and CEO of meez, a recipe management app for chefs, launched the company in 2020 so food and beverage professionals could digitally manage and execute recipe workflow , from creation and cost to organization and training. This pain point in training is one that Sharkey kept hearing from the kitchens.

“Right away we can see the impact of how they can train much faster than before to make sure that when a new person comes on board, it doesn’t take them a month, but to some, just a few days,” Sharkey said. Tech Crunch. “Anecdotally, we have several case studies where there is almost an 80% reduction in the time it takes to train a new employee because they have integrated meez into their organization and can now simply hand over the tasks that they must perform.”

Sharkey is not alone: ​​other startups, like Galley, a food data company, are lending their approach to help this industry. For Galley, he raised $14.2 million in Series A funding earlier this year to help kitchens with predictive purchasing, smart inventory and accurate food production planning.

We previously featured meez last January when the company announced a $6.5 million seed round. At the time, the company worked with around 750 customers and grew that number to 1,200 kitchens worldwide, including fast-casual and fine-dining restaurants, culinary schools, ghost kitchens and catering companies. It also has tens of thousands of active users.

The new investment gives meez total funding of $18 million. The company didn’t plan to raise any funds as soon as it did, but while working on a partnership that accelerated growth, meez began to achieve milestones worthy of a Series A company, and Craft Ventures got ahead of the cycle, notes Sharkey.

“It was really just a smart move,” he added. “We were growing rapidly, had many more customers and felt responsible for making sure we could serve them.”

Along with the increase in its customer base, meez has almost tripled its turnover since the beginning of the year and has 41 employees. It also now offers a free version of its platform for people to get unlimited recipes and cookbooks, sharing and publishing recipes on the web. It also has two other paid tiers for kitchen teams that start at $49 per month.

Sharkey intends to deploy the new funds in product and engineering teams, marketing, and new premium features. For example, chefs will be able to assess how their recipes contribute to the company’s profitability and success, and then be able to adjust their menu items based on sales, demand, and margin data. Additionally, meez is working on a new component targeting bakers (and chefs who do a lot of R&D) that will help with ingredient percentages.

“The short term still creates a universal recipe language that anyone in the world can use to store, create, organize and share your recipes,” he added. “The long-term vision is growth and adding more value to what’s happening holistically in the business to help them generate more revenue from their revenue.”