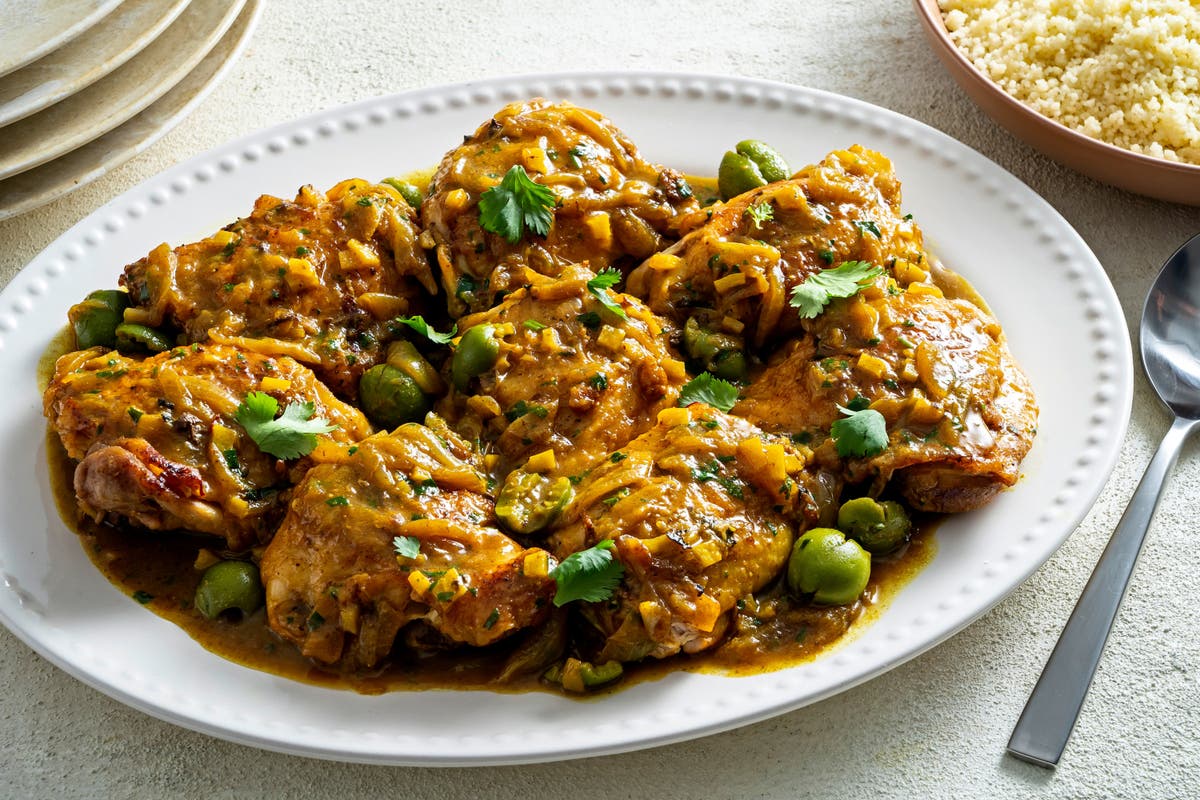 I tasted my first tagine in my 20s. New to New York, I went to dinner in Greenwich Village at a now closed restaurant called Cookies and Couscous. Sitting by the window and sipping mint tea, my friend and I studied the menu, admired the small 20-seat space, and ordered tagines – lamb and chicken – and a bottle of Moroccan red wine.

We smelled our tagines before we saw them, the intoxicating aroma announcing their arrival. The stews, flavored with saffron, ginger and coriander, among other spices, were as delicious as they were aromatic. Along with the couscous, it was an unforgettable meal that I have been thinking about ever since.

Most associated with Morocco, tajine is the name of a dish as well as the container in which it is cooked. The latter has a circular base with low sides and a domed, hat-shaped lid in which ingredients are simmered or braised. The conical shape of the lid allows moisture to condense and return to the pan, keeping the dish moist.

Traditionally, tagines were made of clay to cook gently over a dying fire. Commonly, a kanoun (brazier) is used to gently diffuse the heat (I used it in the recipe below and heartily recommend it). Today, contemporary tagines from brands such as Le Creuset are made with a cast iron base and designed for use in home ovens.

Tagines can be made with vegetables, poultry, meat or seafood, and they are usually served with couscous. The recipe below, adapted from San Francisco-based Moroccan chef Mourad Lahlou’s cookbook, Mourad, uses chicken, as well as olives and candied lemon. (A quick aside: some recipes will tell you that plain lemons are a great substitute for candied lemons. Don’t believe them. In a pinch, a lemon will add shine and tartness, but the salty, briny notes imparted by candied lemons cannot be searched for in well-stocked supermarkets or Middle Eastern markets.)

The version below is deliciously fragrant. The word m’quali, according to cookbook author Claudia Roden in her book Arabesquerefers to tajines “cooked in oil where there is saffron and ginger and the sauce is yellow”.

You will notice that Lahlou’s version finishes the dish with butter. This is where the chef flexes his culinary training by employing a few French techniques, but the recipe is kept simple and achieves deeper flavor with just a few minutes of extra effort.

He first asks you to sear the chicken on both sides in a little olive oil (or melted chicken fat, if you have it). This step produces splatter, so wear an apron, and if you have a splatter guard, use it (the results are so fantastic, though, that I, a die-hard splatter hater, don’t mind the mess). Once the chicken is generously browned, set it aside, pour off most of the fat and cook what seems like an ungodly amount of onions until they are the color of an Irish setter and are tender, supple and on the verge of caramelization.

Now the aromatics come into play: in this pile of schmaltzy onions, you toss together a mixture of coriander, white pepper, ginger, saffron and turmeric. The aroma alone will make you weak, but you’re not done yet. Put the chicken back in the tagine, nestle it in the onions, add the broth and bring everything to a boil. Then the domed lid sits on top and the container moves to the oven to braise.

When the chicken is cooked, you finish the dish on the stovetop, enriching the sauce with the olives and preserved lemon, while the untraditional addition of Lahlou butter rounds out the sauce, giving it dimension and complexity.

What if your kitchen, like many, lacked a tagine? Do not worry. Any thick-bottomed saucepan of similar volume – a casserole, for example – will do just fine. In fact, if you’re planning on making this braise for a crowd, you need to look for something that can hold more food, as the former is meant for smaller yields. I suspect that on the night of my first tagine tasting, a larger batch was cooked in a large pot to serve multiple customers, which would technically have made the dish qdra (named after the large pots used for large parties), and then cut into tagines for a nice presentation.

Whatever your vessel, the rich blend of spices, olives and candied lemons will result in a delicious ember that just might become a beloved recipe in your home too.

This Moroccan-style chicken stew, tajine with olives and candied lemon, is as comforting as it is fragrant. The tajine, named after the clay container in which it is traditionally cooked, is a dish that dates back to the end of the 8th century. A tagine has a round bottom and a hat-shaped lid, which allows air to circulate like in a convection oven.

Traditionally served with couscous, this version can also be served with long-grain white rice, if preferred.

Storage: Refrigerate up to 4 days.

Or buy: Canned lemons can be found in well-stocked supermarkets or stores in the Middle East.

About 10 green olives, pitted and crushed

1. Generously season the chicken on all sides with salt and pepper and let sit at room temperature for 1 hour or refrigerate overnight.

2. When ready to cook, in a tagine or Dutch oven over medium-high heat, heat 1 tablespoon oil until shimmering. Working in batches, if necessary, add half the chicken, skin side down, and cook, turning once, until nicely browned, 3 to 5 minutes per side. Transfer to a platter and repeat with the remaining chicken, if necessary. It can be messy; if you have a splash guard, use it.

3. Place a rack in the bottom of the oven (remove the other racks so that the tagine or casserole can hold) and preheat to 180°C.

4. Reduce the heat to medium and pour all but about 2 tbsp of fat into the pan (if the fat has burned, discard it and add 2 tbsp of oil). Add the onions and cook, stirring often and adjusting the heat as needed so the onions don’t burn, until nicely browned, 12 to 15 minutes.

5. Season the onions with cilantro, white pepper, ginger, saffron and turmeric, add a pinch of salt and cook, stirring, until the spices are lightly toasted, about 90 seconds. Return the chicken to the tagine or casserole, pour in the chicken broth and bring to a brisk simmer.

6. Cover the tagine or casserole, transfer to the oven and braise for 40 minutes, or until the chicken is tender and starting to fall off the bone. Using a slotted spoon or tongs, transfer the chicken to a platter, cover to keep warm, and return the tagine or casserole to the stove. Reduce heat to low and simmer sauce until slightly reduced and coats the back of a spoon, about 6 minutes. Add preserved lemons and olives and cook until heated through. Stir in butter and herbs until butter melts. Taste and season with more salt, if desired. Remove from the heat, cover and let stand for 5 minutes.

7. Spoon the sauce, lemons and olives over the chicken, garnish with more parsley and/or cilantro, if using, and serve with the couscous.