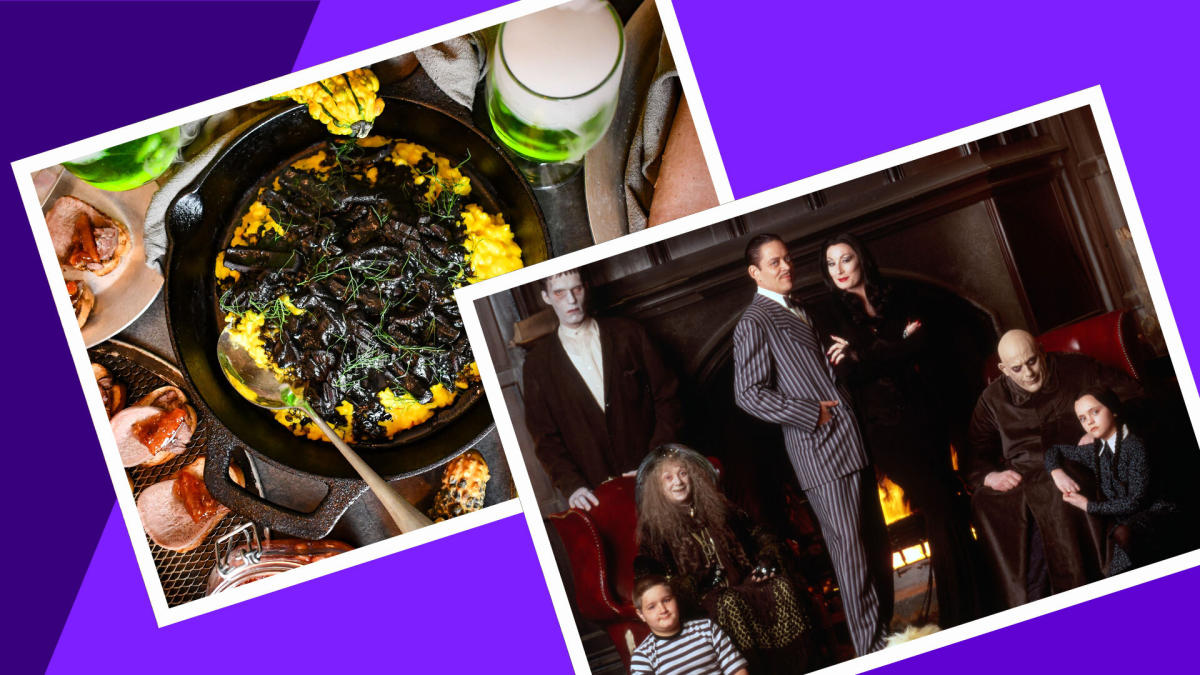 Since Christina Ricci haunted the big screen as the sad and macabre Wednesday Addams in The Addams Family, she was the anointed queen of Halloween. Now Ricci is back, playing Miss Thornhill in Netflix Wednesday, making this Halloween the perfect time to revisit the spooky, offbeat family over dinner and a movie.

Inspired by the deliciously wicked foods that appear in The Addams FamilyI teamed up with chef Heather Pelletier of Sicily Osteria in New York, to create a dinner menu worthy of your next Addams Family viewing party. Our menu includes tongue toast slathered in orange marmalade, scary squid ink squid, and a Morticia-inspired drink that can be made with or without alcohol.

Read on to learn more about the parts of this iconic film that made us scary… and made us hungry.

the original Addams Family first appeared in 1938 in a cartoon by Charles Addams for the new yorker. In 1964, The Addams Family television show premiered on ABC, lasting only two seasons and airing a grand total of 64 episodes. But the show aired widely in syndication — well into the 90s — turning it into a cult classic and making the franchise prime fodder for a new generation of Addams Family Fans.

When Angelica Huston graces the screen as the smoking Morticia Addams in the 1991 Addams Family adaptation, opposite Raul Julia as Gomez Addams, the pair redefine what it means to be “madly in love.”

In the film, Mamie welcomes the guests and immediately offers them a platter of “entrails” served on toast as canapes. Although entrails aren’t really our thing, tongue toast, topped with blood orange marmalade, is both a spooky and delicious way to get your guests into the spirit.

The main course is also inspired by Grandma’s home cooking. “What is that?” Fester asks excitedly when Grandma serves him a plate of dark, wriggling tentacle-shaped slop. “Mom’house special“, Morticia replies in a delicate French accent, prompting a sultry reaction from Gomez.

The film’s final party scene shows Morticia holding a bubbling and steaming bright green concoction, which we absolutely have had to recreate. Our Poisoned Apple Martini is blended with fresh ginger for a bit of zing, accompanied by vibrant sour apple schnapps and finished with dry ice pellets for full effect.

Are you feeling a bit shy? For each recipe, we’ve offered serving suggestions and variations to help you plan a spooky meal everyone can enjoy while you reconnect. The Addams Family.

Salt water: Chill 1 liter of water and bring the other liter to a boil with the sugar, salt and spices. Cook until the sugar and salt are dissolved, awakening the spices.

Cut slices of baguette and toast on each side. Add a slice of tongue to each toast and garnish with a small dollop of blood orange marmalade.

Not sure if you can support a language? Consider using braised tender short ribs instead. Plus, marmalade toast would also be great served with slices of plant-based sausage for a similar spooky effect.

Add a drizzle of olive oil just before serving. Serve over risotto, polenta, potatoes or pasta.

If your guests are disgusted by the squid, do not hesitate to replace them with prawns. If you’re forgoing seafood entirely, consider replacing the calamari with shredded oyster mushrooms and replacing the squid ink with a few dashes of activated charcoal for a similar (vegan) visual effect.

For the ginger-infused apple juice:

Simply replace the vodka with sparkling cider and the schnapps with green apple syrup.

Well-being, parenthood, body image and more: discover the who behind the whoo with the Yahoo Life newsletter. register here.

2022-10-14
Previous Post: The best garlic butter recipe uses a whole head of garlic
Next Post: A new kind of cookbook