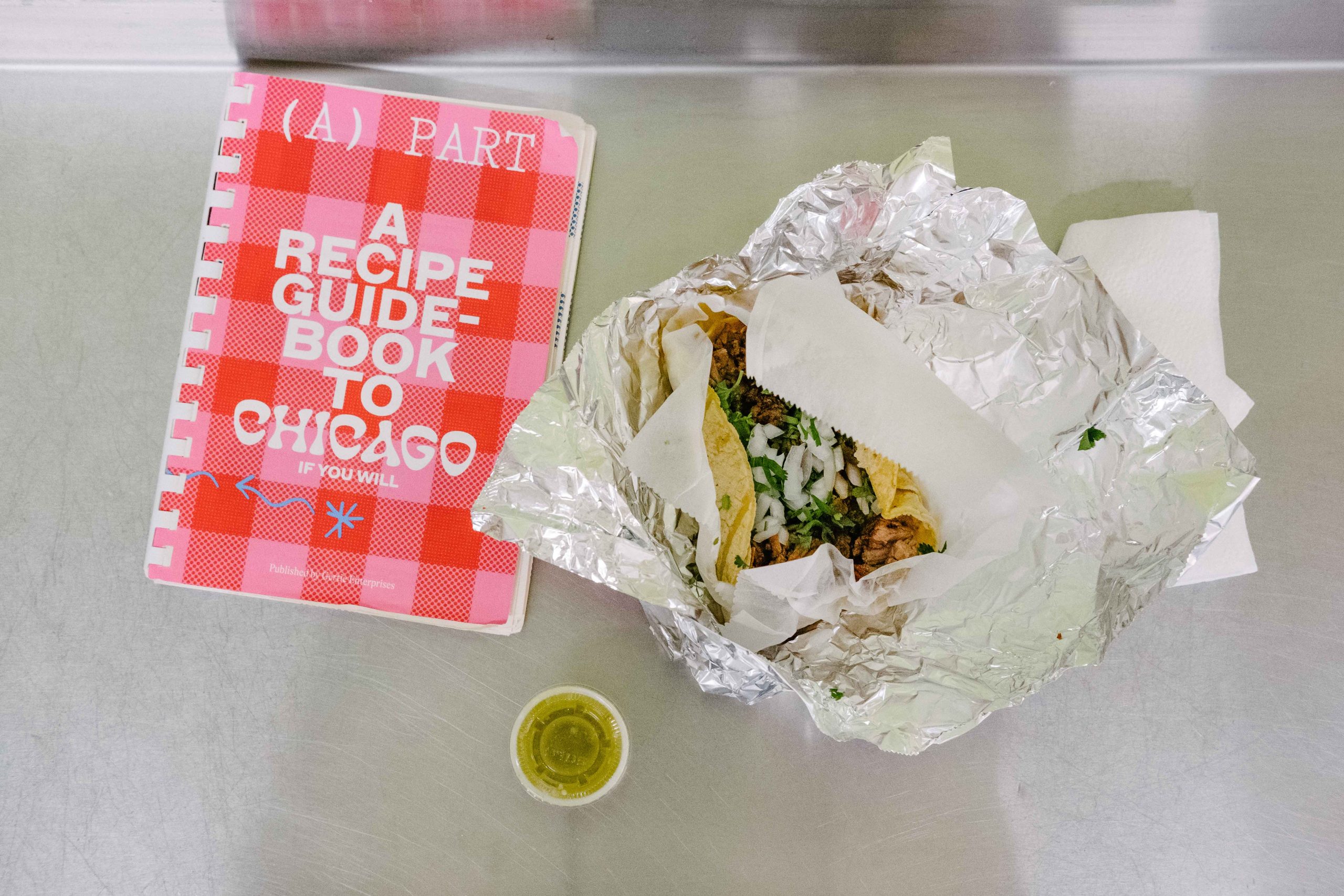 A new kind of cookbook

Enter Abby Pucker and her new community business, Gertie. Gertie is described as a “sports team for arts and culture”, if you will. Its mission is to build a community of young professionals in Chicago (both transplant and native) who are ready to engage with the city and each other in new ways. And (A)Part: A Recipe Guide to Chicago (if you will) is the companion piece to the new venture, intended to introduce the reader to different restaurants, recipes, neighborhoods and cultural landmarks through the eyes of 27 different Chicagoans.

Just to note a few members of the well-rounded cohort of Chicagoans from diverse backgrounds, ages, races, and community affiliations, contributors include names you may know: rapper, actor, and cannabis entrepreneur Vic Mensa; photographer, director and owner of Monday Coffee Felton Kizer; chef/co-owner of Thattu Margaret Pak; and now, community organizer Abby Pucker. And then there are some that you don’t know but that will be presented. The book is for “anyone willing to be curious”. Thus, while more than 40 different traditionally defined neighborhoods are technically represented, all cultural maps are drawn without identifying the neighborhoods. They are simply drawn on a grid with markers that mark the four “directions” of the city. In Abby’s own words, the book is meant to be “an experiment in tracing and redefining community through aligned cultural interests and passions, rather than zip code.”

The book is short and sweet, just like the perfect day in Chicago, especially at this time of year when the sun starts to set earlier and the wind chill makes you want to get inside before dark anyway. . Much like Chicago, the layout of the book is inviting, but it makes absolutely no attempt to fit into it. . It’s hardcover and looks more like a field guide than a cookbook. I’d even recommend a pencil for note taking, recipe conversions, and X’s to mark the dots that hit a specific spot on your heart and stomach.

(A part wants you to explore the city, even the parts you might be a little hesitant to visit without a chaperone, a co-signer – damn it, at least a regular’s go-to menu order. The book accommodated the reader’s likely apprehension by ignoring it altogether. Once you’ve passed the front pages of contributors, you’re greeted with a foreword that reminds you: “Trust — in institutions, in government, and, frankly, in each other — is at an all-time low. This lack of trust often lends itself to isolationism and encourages people to withdraw into themselves in the form of serial delivery app orders, or to faces and places they know best, hyperlocal ( and maybe a little exclusive?) communities where diversity of thought, taste and opinion is rejected. (A part reminds you, “Chicago has trust issues, and they’re justified, but that doesn’t mean they’re inevitable.”

So the point of this cookbook, if you will, is to bring together the experiences of every contributor in this town like different ingredients in a recipe, working together to create something deliciously greater than the sum of their parts. In the end, Abby and her team hope to impress the reader with the importance of community through an active exercise in reimagining those mental and geographic boundaries that keep us (a) apart. (See what she did there?)

What secret places could this book reveal to me that my favorite TikTok or Chicago viral lifestyle site has yet to discover, you ask? Well, here’s a quick sample of the recommendations you’ll find within the pages of (A part:

• The urban ruins of what was once a legal graffiti art gallery (it’s now a target’s back wall.)

• Intimate details of our very own downtown chocolate shop (Chocolate Cake in a Bag recipe is included; Funny Man in the Hat and Oompa Loompas are not.)

• A special family pizza recipe, the most typical of Chicago you can get

• A black and gay-owned bar in Andersonville where the contributor often meets northerners, southerners, westerners, foreigners, and sometimes even their therapist

• More monuments, parks and gardens than you can fit into your schedule before the weather breaks for good, and a variety of theatres, workspaces elsewhere, restaurants, museums and shops to visit once he does

• A Kenyan-Indian-Canadian-Chicagoan transplant immigrant’s guide to Chicago through his multicultural lens (this includes their mother’s goan prawn curry recipe.)

• An account of the Cook County Jail, a place I believe every Chicagoan should visit at least once (to volunteer, hopefully not by force or court order)

• A recipe for flourless, eggless, sugarless, and dairy-free “cookies” from a Chicagoan with gastrointestinal issues who ponders his favorite foods he’s no longer allowed to eat

• A family-friendly puff pastry recipe and guide to the North Side African Grocery and Braiding Shop, straight from the notes of a self-proclaimed Chigérien