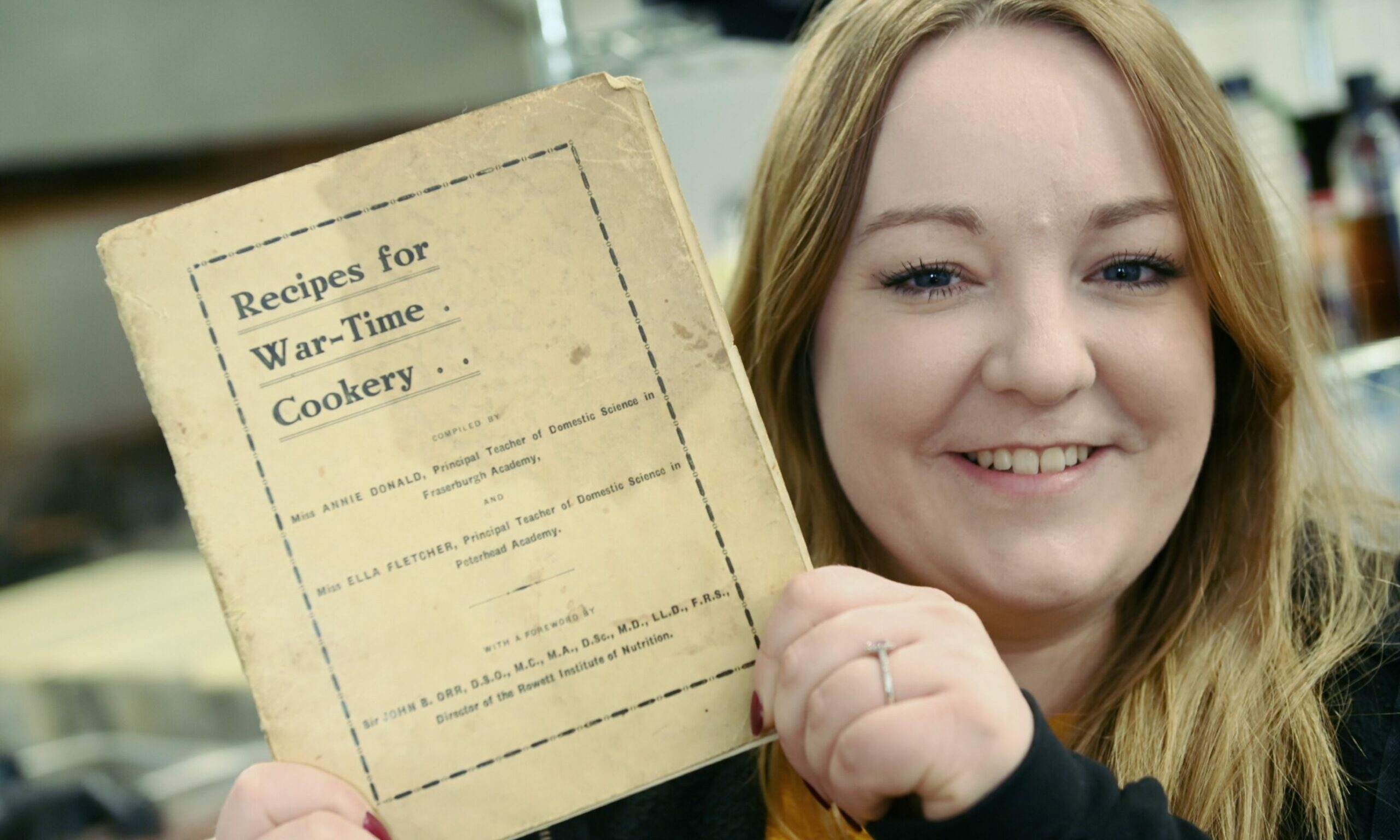 A war cookbook pulled from the past for a modern makeover

A rediscovered WWII-era cookbook written by Aberdeenshire teachers is about to get a contemporary twist.

Lindsay Jackson, whose great-grandmother used the recipes during the war, plans to repurpose the simple homemade dishes for her barbecue meat restaurant.

She discovered the book during a cleanup at her mother’s house and was struck by how her wartime philosophy of using local products matched her own vision of sustainability.

“The first thing for me when I read it was, wow, this is exactly the same as what we do,” says Lindsay, co-owner of Smoke and Soul, a former street food business that now operates in premises in Aberdeen and Edinburgh and owns an industrial smokehouse in Bridge of Don.

Inside the book, titled Recipes for War-Time Cookery, are instructions for pigeon pie, salt fish, marrow sandwiches, stuffed heart, and peach and turnip jam, among others.

Some entries highlight the hardships of the time. One liver, potato and onion recipe is described as “Poor Man’s Goose”, while another entry is called Wartime Stew.

However, all recipe ingredients are designed to be grown on site.

In a preview of the book, John Orr, then director of the Rowett Institute of Nutrition which is now part of the University of Aberdeen, called on locals to grow more potatoes and other vegetables in their plots.

He wrote that it will help the Ministry of Food in its “terribly difficult task” to feed the nation.

“…the type of food we produce in our own country has, on the whole, greater nutritional value than the food we import,” he added.

Recipes of war to fight against ill health

And in a sign that worries about processed foods go back further than we think, Orr also urges his readers to ward off malnutrition by using homemade produce.

“Housewives have relied too much on the grocer’s van and too little on their own gardens,” he wrote.

“This idea of ​​doing a lot of things from scratch is what we’re trying to do ourselves,” she says.

“And if we are not starting from scratch ourselves, we choose companies with the least treatment possible.”

A spirit of collaboration

Lindsay is now working with other Aberdeenshire food businesses to come up with collaborative dishes inspired by the cookbook.

His company, Smoke and Soul, this month partnered with Big Manny’s Pizza in Aberdeen.

But in the spirit of wartime unity enshrined in the cookbook, Lindsay is keen to expand her alliances further.

She once discussed reusing a jam recipe with Alice Lane, owner of Inverurie From Bakery Lane.

And Lindsay’s partner and Smoke and Soul’s head chef, Corey Milne, thinks a full three-course wartime menu could be crafted.

“There are things in the book like the stuffed skirt (a kind of steak) that is still done today,” Corey says.

“A lot of older people still buy this and make it.”

Lindsay adds, “The best way to do that is to take inspiration from the book and work with other companies to bring these things back to life, eighty years later.”

Meanwhile, Lindsay is happy that rediscovering the cookbook has connected her to her great-grandmother.

“It’s nice to have something from her that’s been passed down from generation to generation.”

Learn more about the food and beverage team…