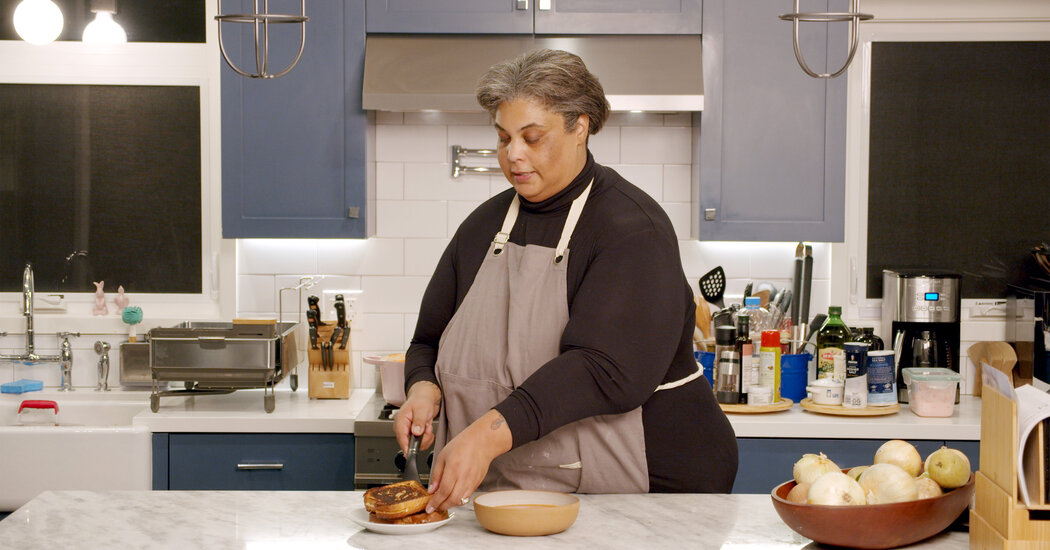 I am Roxanne Gay. I am at home in Los Angeles. And today I’m making tomato soup and grilled cheese, because it’s getting cold outside. [MUSIC PLAYING] For the soup, you will need butter, onions, all-purpose flour, diced tomatoes, chicken broth, sugar, salt and pepper, half and half, and honey. For the grilled cheese sandwiches, you will need bread, butter, mayonnaise, Gruyere and Cheddar Jack. So, this is a really easy tomato soup recipe that’s actually on the New York Times website. Imagine that. First you need to cut three or four onions. I use a mixture of red and yellow, because I don’t know why, because I can. I have made this soup once before. It’s a bit sweet, which is interesting. You don’t necessarily expect that. I don’t make many changes. It depends. But sometimes I might put a few extra spices in it just to kick it up a notch. “You always have to keep stepping up, don’t you?” So now we are going to melt 1/2 pound of butter. Alright, now I’m going to add the onions and cook until translucent. So really, about 20 minutes. So when the onions are done – and you’ll know it because it will smell good – you add 1/2 cup of flour. And you let it cook for about three minutes or so. Now I just add four cans of diced tomatoes, which is actually a lot. But the good news is that you can eat tomato soup for the rest of your life. 3/4 cup half and half and 3/4 cup chicken broth, 1/4 cup sugar, and you also add a tablespoon of salt and plenty of pepper. It should be stirred regularly for half an hour. I’m skipping the celery salt, which you can also add, since I don’t have any. So, fun fact: I hated soup growing up. I especially hated the tomato soup. It was just like coarse tomato water. One day, I was bored and decided to make this recipe, and found that under the right circumstances, I will enjoy a good soup. So, now I’m going to add 2 tbsp of honey and use my hand blender to puree it into something that looks like a soup. Now I will grate the cheese for the grilled cheese. Grated cheese is actually better to use because it melts faster. I use Gruyère and Cheddar Jack. You can use whatever you want. If you want to make your grilled cheese golden and crispy, one way to do that is to add a little mayonnaise to one of the outer bread slices. On the other side of the bread, a little butter. Cheese, like, you know, just like, how much cheese is your 47-year-old stomach going to tolerate? Put them in your pan, and let them cook until the cheese is melted. So it’s almost ready, so we’ll just flip one side over the other. Just like five more minutes but keeping an eye on it, because you don’t want the bread to burn. This one is a bit well done, but grilled cheese and tomato soup. Enjoy and stay warm. [MUSIC PLAYING]